By Catrin Nye and Divya Talwar BBC Victoria Derbyshire programme
A new report has called for the practice of some British Asian men mistreating women and leaving them soon after getting married in South Asia, to be treated as a form of domestic violence.
Academics at the University of Lincoln have discovered that these men have been taking thousands of pounds from their new wife's family and using the women as domestic slaves for their in-laws.
These "disposable women", as the report calls them, are also often physically abused and then abandoned either once they have moved to the UK, or - more commonly - while still in India.
Some are brought temporarily to the UK but later taken on a pretend holiday back to India, where they have their passport taken away.
Many women hide the fact that this has happened to them, so academics spent more than a year finding 57 women in India who had experienced the phenomenon and would share their stories.

Marriage for Sunita, not her real name, began how she had always dreamed it would in a grand venue in India's Punjab region, with hundreds of guests and a beautiful red dress.
"Everything was great," she says, as she runs through photos of her big day on her phone.
After the wedding, her new husband stayed with her for a month in India before returning to his home in the UK. Sunita expected him to come back to India shortly afterwards and take her back to live with him there, but things then started to go wrong.
"It was coming up to a year and he still didn't return," she says. "I asked him many times 'Come back to India, when are you coming?' but he would just say 'Not now, another time'.
"He demanded a lot from me too. At times 'give money' and at other times 'give furniture'."
Sunita's husband eventually stopped talking to her on the phone. She hasn't seen him since and has also since found out he was already married to another woman in the UK.
As is common in India, and some other countries in South Asia, Sunita's family had given her husband's family almost £3,000, as well as around £4,000 in gold as a dowry - money or goods given by the wife's family to the husband's when they get married.

The Victoria Derbyshire programme is broadcast on weekdays between 09:00 and 11:00 on BBC Two and the BBC News channel.
Sunita says her husband and in-laws were also physically abusive towards her.
"When I used to question if he had a wife [in the UK], and why did he marry me - they would beat me just for asking."
Her family is not rich and her father is watching on as she speaks, clearly devastated by what has happened. He spent thousands of pounds on a marriage he thought would give his daughter a happy future.
"I'm very upset. I'm finding it hard to talk about. He made [sexual] relations with me, my life is ruined," she says. 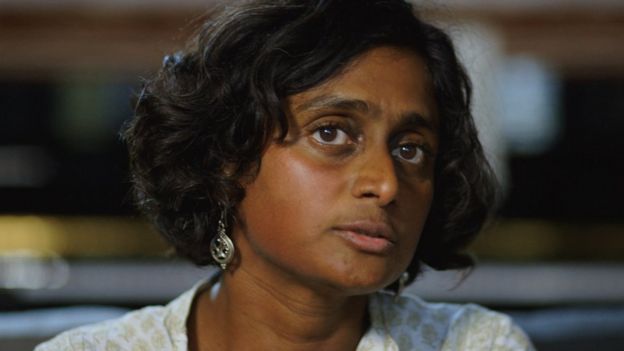 Researchers point out that this problem also exists in Pakistan and Bangladesh - countries where marriages to people living in the UK, the US, Canada, and other nations with a large South Asian diaspora are common.
Dr Sundari Anitha, from the School of Social and Political Sciences at the University of Lincoln, spoke to women personally affected on a number of trips to Punjab, Delhi and Gujarat in India.
She met women who had paid as much as £25,000 in dowry before being abandoned, women raped by their new husbands, some who were used to have a child and then abandoned and others left in India to act as carers and domestic slaves for their in-laws.
She says patriarchal culture in South Asia means being abandoned can ruin a woman's life.
"The stigma is massive and it even has an impact on other people in the family. So a woman's sister will find it harder to get married. She will find it harder to get a job, she faces financial insecurity and she's seen as damaged goods - primarily because the assumption is she's had sex."
The report recommends that the British state recognises abandonment as a form of domestic violence and offers protection to women "disposed of" by British men, even if they never travel to the UK.
Pragna Patel, director of campaign group Southall Black Sisters, worked with academics on the study and says this would offer recourse to some sort of justice for women who at the moment have none.
The group says that the constituent parts of abandonment - such as blackmail, fraud, emotional abuse, financial abuse, controlling and coercive behaviour and domestic servitude - can be prosecuted under existing laws, but that "few, if any, perpetrators face any consequences".
The victims may be unaware of their rights or feel too ashamed or frightened to report their abuse, it is suggested.
Ms Patel explains, however, that "once it is recognised as domestic violence then all the legal avenues that should be open to women either to seek protection or prosecution, or other legal remedies, would be available to abandoned women".
She says that in the last month, staff at Southall Black Sisters have encountered a case in which a man had married and abandoned five different women - each time profiting financially.
"It's like a business for him," she says. "The perpetrators are British nationals. If the British state turns a blind eye or is indifferent to this abuse then it is contributing to this culture of impunity - these men are not held to account by anyone.
"We have to wake up to the fact that violence in transnational spaces is a new and emerging form of violence against women."
Read more: http://www.bbc.com/news/uk-37472233?post_id=1107237902639582_1416001658429870#_=_
Posted by Terrobuster at 11:18 PM