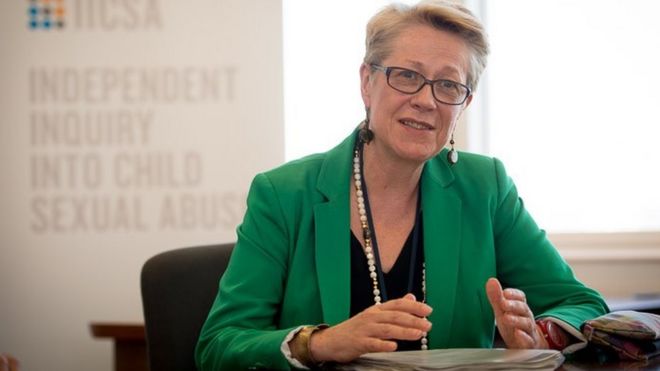 An average of 80 child sex abuse cases a month have been referred to police over the last year following victims' testimony to an independent inquiry.
The cases emerged as part of the Independent Inquiry into Child Sexual Abuse (IICSA).
Drusilla Sharpling, from the inquiry's panel, said it was not known whether all of the allegations were new.
The figures were revealed as the inquiry's Truth Project published its first report.
The project was set up to enable victims to speak anonymously to the inquiry and has attracted interest from 500 people wanting to share their experience, the IICSA said.
It said referrals to the dedicated police team were a result of written submissions and reports received by the inquiry as well as evidence given to the Truth Project.
The cases are being handed to Operation Hydrant, the national body coordinating investigations of non-recent sexual abuse of children between police forces.

Anonymous summaries of 45 accounts given to the inquiry have been published, recounting abuse in unnamed religious institutions, schools and care homes.
The accounts include:
Ms Sharpling said: "It would be rare, in my experience, not to make a referral from the Truth Project because most people are coming to report child sexual abuse and that is a crime.
"Where somebody reports child sexual abuse they are clearly reporting a criminal offence. Our terms of reference require us to report those matters to the police.
"We can do so anonymously if that person wishes."
Participants called for the inquiry to recommend a legal requirement for professionals to report child abuse, better training for those working in institutions, and better counselling for victims.
One said: "I think that we need to stop sweeping child abuse under the carpet and take away the stigma."