Employees claim they are routinely denied bathroom breaks and are forced to ‘wear diapers to work’ as some of the largest processing companies in the US seek to optimise the speed of production
While concerns about food safety and animal welfare dominate discussions about the perils of the modern food system, there's a downside that many might find just as troubling: the often inhumane conditions people who work in the industry face.
A new report by Oxfam America, an arm of the international anti-poverty and injustice group, alleges that poultry industry workers are “routinely denied breaks to use the bathroom” in order to optimise the speed of production. In some cases, according to the group, the reality is so oppressive that workers “urinate and defecate while standing on the line” and “wear diapers to work.” In others, employees say they avoid drinking liquids for long periods and endure considerable pain in order to keep their jobs. 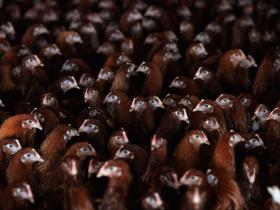 The findings are the result of hundreds of interviews with line workers from some of the largest poultry processing companies in the United States, including Tyson Foods and Perdue. And they bring the current state of the poultry industry into serious question. Competitive forces, they suggest, are driving poultry processors to produce as much meat as possible, as fast as possible, leading companies to mistreat their workers, even if unknowingly.
Today, poultry processing plants are allowed to funnel chickens through their assembly lines at a rate of 140 birds per minute, a rate which the industry recently lobbied to increase by another 35 birds per minute. The speed has been great for business, but for those working on the line, it has made for extremely taxing shifts. Just ask Debbie Berkowitz, a senior fellow at the National Employment Law Project who used to work with the government agency that oversaw industry practices. On Wednesday, she published a piece in response to the new report. This is how she described the conditions:
In my work at the Occupational Safety and Health Administration, I witnessed the dangers: poultry workers stand shoulder to shoulder on both sides of long conveyor belts, most using scissors or knives, in cold, damp, loud conditions, making the same forceful movements thousands upon thousands of times a day, as they skin, pull, cut, debone and pack the chickens. The typical plant processes 180,000 birds a day. A typical worker handles 40 birds a minute.
By law, companies are required to grant their employees access to bathrooms. A set of standards, written by the Occupational Safety and Health Administration (OSHA) in 1998, makes clear that facilities must be available to employees upon need. In response, the industry has instituted a system, whereby extra workers are available to swap in in the case someone has to leave the line to use the restroom, a system which the government supports so long as “there are sufficient relief workers to assure that employees need not wait an unreasonably long time to use the bathroom.”

We're concerned about these anonymous claims and... are checking to make sure our position on restroom breaks is being followed

But the system is either flawed or being eschewed by supervisors, according to Oxfam. Workers reported waiting for more than an hour for someone to swap in, if anyone came at all. Many of them said they were forced to urinate or defecate where they stood or leave the line without permission, because no help arrived. At some plants, workers have come to expect no relief, leading them to take embarrassing measures to withstand the conditions.
“I had to wear Pampers. I and many, many others had to wear Pampers,” one worker told Oxfam, an admission the organisation found to be surprisingly common.
The industry has responded with both concern and denial. Oxfam says it reached out to all of the companies mentioned in the report, but only heard back from two: Tyson Foods and Perdue. Both said they don't tolerate the sort of practices mentioned in the report, and cited steps they have taken to make sure working conditions at their processing plants are safe and humane. But only one, Tyson, acknowledged the possibility that there were slip-ups happening under their watch.

Gary Mickelson, the senior director of public relations for Tyson Foods, expressed consternation in a follow up e-mail about the report. “We're concerned about these anonymous claims and while we currently have no evidence they're true, are checking to make sure our position on restroom breaks is being followed and our Team Members' needs are being met.”
Mickelson said he has met with officials of Oxfam America in the past to talk about their concerns. “We’ve told them that while we believe we’re a caring, responsible company, we’re always willing to consider ways we can do better,” he said in an e-mail. “We do not tolerate the refusal of requests to use the restroom.”
Perdue, on the other hand, didn't leave open the possibility that its workers were being subjected to the conditions cited in the report. Julie DeYoung, a company spokesperson, said an internal revenue failed to corroborate Oxfam's findings, citing the company's policy, which allows line workers to take two 30-minute bathroom breaks over the course of an eight hour shift.
“If a department is short-staffed that day, there may be times it is difficult to provide immediate coverage,” DeYoung said in an e-mail. “If an associate has a health or other reason why they need more frequent restroom breaks, they can visit the onsite Wellness Center for support services or talk with Human Resources to request an accommodation for their condition.”
The concerns raised in the Oxfam report are the latest in a string of evidence that suggests those who work to ensure that chicken is both widely and cheaply available endure harsh treatment and face grueling conditions. A 2013 report by the Southern Poverty Law Center found that nearly 80 per cent of 266 workers surveyed in Alabama said they were not allowed to use the bathroom when they needed to. Another report, published just last month, found that 86 percent of workers surveyed in Minnesota said they received fewer than two bathroom breaks each week.
Asked whether video footage, which is often available in plants, might help to show whether workers were actually being allowed to leave the line to use the bathroom, Mickelson, the Tyson spokesperson, said such monitoring is available in some parts of the company's plants. DeYoung, the Perdue spokesperson, didn't respond to the question.