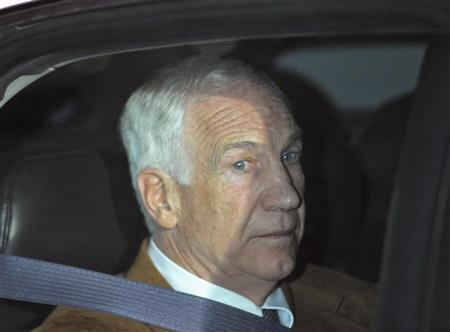 (Reuters) - Convicted child molester Jerry Sandusky is likely to break a long silence when the former Penn State assistant football coach is sentenced next week, a defense attorney said on Friday.
Sandusky, 68, is expected to receive what amounts to a life sentence on Tuesday at Centre County Court in Bellefonte, Pennsylvania.
He was convicted in June on 45 counts of molesting 10 boys over a 15-year period in a scandal that rocked college athletics and riveted national attention on child sexual abuse.
Asked by Reuters if Sandusky would make a statement at the hearing, defense lawyer Karl Rominger texted: "Unsure but likely."
Sandusky did not testify during his two-week trial, but denied the allegations in interviews with the New York Times and NBC television after being charged in November 2011.
In a telephone interview, Rominger said sentencing by Judge John Cleland was expected to go quickly.
"I don't see that the sentencing will take more than several hours at the most, but it all depends," he said.
Rominger and fellow defense attorney Joe Amendola have said they plan to appeal the convictions. They contend they did not have enough time to prepare.
(Reporting by Ian Simpson; Editing by Jim Loney)

Posted by Terrobuster at 1:19 AM