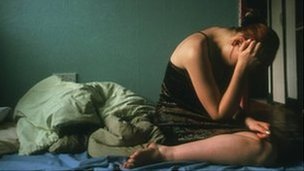 Women's Aid said many women trafficked thought they were coming to the UK for a better life
Human trafficking is a growing problem in Northern Ireland, according to the DUP MLA Lord Morrow.
According to official figures, there were 27 victims last year but that is just the tip of the iceberg, he said.
Lord Morrow is so concerned he has drawn up his own private members bill on the issue.
He held a seminar at Stormont on Tuesday.
Lord Morrow was inspired after reading about Abraham Lincoln, and William Hague's biography on the anti-slavery campaigner William Wilberforce.
He decided that more robust laws were needed than those being introduced by the Department of Justice and Westminster.
"One is to support victims of trafficking, two is to make more robust provision for the conviction of traffickers and also to reduce demand for trafficking," he said.
"Those are the three issues that are important to me and those are the ones that the bill is built around."
After the MLA for Fermanagh and South Tyrone began consulting on his bill in August, he was contacted by a woman who had been a victim of human trafficking.
"She related to me the most horrendous story, it would have taken a tear from a stone, where she actually said she was raped 22 times," he said.
"Now that to me, I think, was a confirmation that you're doing the right thing here keep at it.
"Whenever you hear stories like that you just can't turn away and let somebody else deal with it, you have an onus and a responsibility, and that confirmed it for me."
Women's Aid has warmly welcomed the efforts of Lord Morrow.
Better life Team leader of the Belfast and Lisburn branches, Noelle Collins, has helped 43 women in the past three years.
"Some women come here and they think that they're coming for a better life and sometimes their families have been paid for them to come over here," she said.
"They think they're going into maybe nanny jobs, au pairs, and they come here and it's a different sort of life - their passports are taken off them and the abuse starts."
Ms Collins said some women are told they are in debt to their traffickers and must pay it off.
"One woman said she was offered either six months as a prostitute or two years as a house keeper post and she took the housekeeper post," she said.
"She was told time and time again over that two year period that if she didn't comply with the traffickers, her family back home would face consequences.
"The fear of that meant she had no contact with her family but she was worried what was happening to them back at home and she continued to do that job."
Lord Morrow's bill involves 16 clauses, one of which would make it an offence to buy the services of a prostitute.
Support Ginnila Ekberg is a Swedish-Canadian human rights lawyer and feminist who advised the previous Swedish government on its own legislation.
She said prostitution can be abolished but the right services and support must be in place.
"You have to ensure that woman in prostitution have good service programmes to get out of prostitution, support so that they can go on and live a life," she said.
"You have to ensure that the whole chain of perpetrators are criminalised and I think it's important to underline that not just traffickers and pimps are in that chain, but the final end of the chain is the buyer because if there wasn't the demand, the traffickers would go elsewhere."
Ms Ekberg said there was initial resistance to the law by police but attitudes have since changed and a ten-year study on the law found that Sweden compared favourably to neighbouring countries.
"I have myself met a number of women who have underlined specifically that this law was the first time they felt that the state had cared about their experiences because somebody took their life seriously and wanted to stop the perpetrators," she said.
Lord Morrow's bill also includes a clause that includes forced begging in the definition of exploitation.
New support would ensure each child victim has a legal advocate and would introduce clear compensation procedures.
Consultation on the bill ends on Thursday.
Lord Morrow is hoping the bill will have its first reading in the assembly chamber before Christmas.

Posted by Terrobuster at 5:59 AM