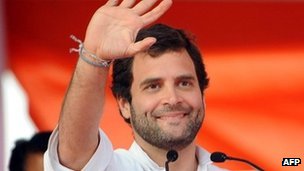 Rahul Gandhi is seen by many as a future prime minister
India's Supreme Court has dismissed a petition which accused Congress party MP Rahul Gandhi of raping a woman.
The court also ordered the petitioner, a former legislator, to pay 500,000 rupees ($9440, £5,852) in damages to Mr Gandhi for defaming him.
Kishore Samrite of the regional Samajwadi Party had alleged that Mr Gandhi had abducted and raped a woman in Uttar Pradesh in December 2006.
Mr Samrite said he made the allegations based on a website report.
The report apparently said that Mr Gandhi and his friends kidnapped and raped a girl living in his parliamentary constituency of Amethi.
The Supreme Court said the petition was "without substance" and had damaged Mr Gandhi and his family's reputation.
"The allegation is without substance and without an iota of evidence," Press Trust of India quoted a bench of Justices BS Chauhan and Swatanter Kumar as saying.
"The reputation of Rahul Gandhi has been damaged by the undesirable act of the petitioner Kishore Samrite," the bench said.
The court ordered Mr Samrite to pay a fine of 2m rupees ($37,760, £23,401) for "abusing the process of law on the basis of incorrect statement".
It also asked him to pay damages of 5m rupees each to Mr Gandhi and the family of the girl.
Mr Gandhi's lawyer, PP Rao, had told the court that Mr Samrite's allegations were a "clear case of sinister political mudslinging against a promising young leader of the country".
Mr Samrite is a former legislator from the regional Samajwadi Party, which is in power in Uttar Pradesh.
Mr Gandhi had campaigned extensively for his party during the state elections at the beginning of the year.
The state was once a Congress stronghold, but the party has lost ground over the years to regional parties and the Congress lost heavily this year.

Posted by Terrobuster at 8:21 AM