LONDON — The number of people who said they were sexually assaulted by Jimmy Savile, one of Britain’s most popular television hosts, expanded to 300 from 200 in just the last week, and other people may have acted with him, the Scotland Yard officer heading the investigation said Thursday.
Enlarge This Image 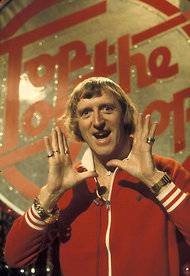 An undated photograph of Jimmy Savile. Hundreds of people have come forward to accuse him of sexually abusing them.
The officer, Cmdr. Peter Spindler, described Mr. Savile, who died last October at 84, as “undoubtedly” one of the most prolific sex offenders in recent British history, during a 50-year career as a self-styled pied piper for the young, the sick and the lonely. Commander Spindler said that in preliminary telephone interviews with 130 of the potential victims, 114 of them had accused Mr. Savile of criminal behavior ranging from “inappropriate touching” to rape. Of the 300 complainants, he said, all but 2 have been female.
Commander Spindler said the “vast majority” of the accusations logged by the police were against Mr. Savile alone, with the remainder involving Mr. Savile and others or episodes in which the entertainer was not implicated. Although the commander specified that investigators had found no evidence of a “pedophile ring,” as some published accounts in Britain have suggested, he said that a number of “living people” were under investigation.
Later, an article on the BBC’s news Web site quoted “sources close to Scotland Yard,” whom it did not further identify, as saying the police were looking at some “figures of high standing” who might have helped Mr. Savile. “It is thought investigations are looking at those who may have assisted Savile, helped organize abuse, cover it up or taken part in assaults themselves,” the BBC story said.
An article on The Guardian’s Web site, citing no sources, said the newspaper “understands” that “names of at least three doctors” who worked at hospitals linked to Mr. Savile over decades had been passed to police investigators, with “claims that they were at the heart of a loose network of child abusers connected with Savile.”
The Guardian story noted that Mr. Savile kept an office and living quarters at the Broadmoor Hospital, a high-security psychiatric treatment center in Berkshire, and a bedroom in the Stoke Mandeville Hospital, in Buckinghamshire, which has one of the largest units in the world that specializes in spinal injuries; both institutions are close to London. The newspaper also said he was given “free rein” at Leeds General Infirmary, in the northern industrial city where he was born and where he found his first job as a boy, working in a mine.
Commander Spindler said his investigation, code-named Operation Yewtree, had not yet led to any arrests, but he implied that they might not be far off when he said that the police were preparing “an arrest strategy.” In the meantime, he said, police investigators were proceeding cautiously with Mr. Savile’s accusers, spending as much as four hours on each initial interview.
“This may be the first time that some people have actually spoken in any detail, and we don’t underestimate how significant an event it is for them to disclose sexual abuse,” he said.
Commander Spindler, who spoke at a news conference and in interviews with British news organizations, did nothing to allay the shock that the Savile scandal has caused across Britain. The weight of the evidence against Mr. Savile, he said, is overwhelming, not least because of the similarities in what the accusers have told the team of officers — raised to 30 in recent days, from an original group of 10 — about the abuses.
“We have to believe what they are saying, because they are saying the same thing independently,” he said.
The BBC reported on Wednesday that Mr. Savile, a bachelor, was investigated but never prosecuted for sexual abuse at least half a dozen times during a television career in which he presented himself as an irrepressibly jaunty figure with a vocation to spread happiness into some of the most vulnerable corners of society. But a cascade of revelations in the past month have suggested that his wildly successful programs, “Top of the Pops” and “Jim’ll Fix It,” as well as charitable work that raised tens of millions and made him a tireless visitor to hospitals, nursing homes and institutions for the emotionally and psychologically disturbed, were vehicles for another career, as a relentless sexual predator.
The scandal has thrown his employer, the BBC, into one of the greatest crises in its 90-year history as Britain’s revered public service broadcaster, drawing in several senior figures there, including its current director general, George Entwistle, who took over in September from Mark Thompson, the incoming president and chief executive of The New York Times Company.
Mr. Thompson was director general of the BBC when the editor of a current affairs program canceled an investigation into Mr. Savile late last year, just as other divisions were planning Christmastime tributes to him, two months after his death.
Mr. Thompson has said repeatedly that he knew nothing about the investigation by the current affairs program, “Newsnight,” while it was under way; had no role in canceling it; and had heard none of the suspicions about Mr. Savile. He has agreed to answer questions from Parliament and from the independent investigators examining the events at the BBC.
The police, the National Health Service and other institutions have been shaken by what the disclosures have shown, and the political shock waves have led the prime minister, David Cameron, to demand that the BBC, in particular, account for its failure to protect Mr. Savile’s victims, some of whom were said to have been abused in his BBC dressing rooms.
Commander Spindler suggested the scandal and the subsequent investigation of the sexual abuse of children would have a cathartic impact on Britain. He said the events of the past month had been “a watershed” that would force public institutions to develop new and tougher programs to detect and combat the sexual exploitation of children, push the police to intensify their own procedures and encourage victims to come forward.
“I think what’s happened with this inquiry,” he said, “is that they do have a voice, and that they will be heard.”
John F. Burns reported from London, and Alan Cowell from Paris.

A version of this article appeared in print on October 26, 2012, on page A12 of the New York edition with the headline: Police Prepare ‘Arrest Strategy’ as BBC Sexual Abuse Case Grows.

Posted by Terrobuster at 9:32 PM