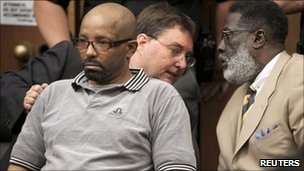 Anthony Sowell (left) had blamed the smell from his house on a nearby sausage shop
A sex offender who lived among the remains of 11 dead women at his home in Cleveland in the US state of Ohio has been convicted of killing all of them.
Anthony Sowell was found guilty of aggravated murder, kidnapping, tampering with evidence and abuse of a human corpse in the 11 deaths.
The 51-year-old former US Marine could face the death penalty.
The bodies were found after police went to arrest Sowell in October 2009 on a sexual assault allegation.
He showed little emotion on Friday as the jury returned their verdict of guilty on 82 counts after more than 15 hours of deliberation.
Police criticised The trial heard how the women's bodies had been disposed of in refuse bags and plastic sheets, then dumped around Sowell's house and backyard. 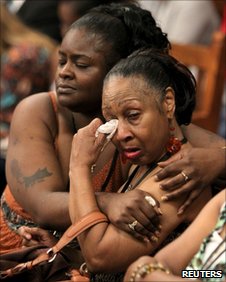 Relatives of the victims sobbed in court, as did some of jury
Nearly all of the women had been strangled and were nude from the waist down.
Cleveland's police force was accused of failing to properly investigate when the women began disappearing in 2007 as most of them were impoverished drug addicts.
During the trial, several women gave testimony of alleged attacks by Sowell, who was previously convicted of attempted rape in 1989.
One woman told the court she had been raped by Sowell, and that she had seen a headless body in his home.
Sowell's sentencing begins on 1 August.
Until the discovery of the bodies, many in the neighbourhood believed the bad smell was coming from a nearby sausage shop.
The family-owned shop spent $20,000 (£12,260) on plumbing and other maintenance in attempts to get rid of the odour.

Posted by Terrobuster at 9:59 PM