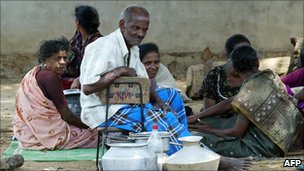 Over the past two years Sri Lankan Tamil migrants have travelled all over the world
A group of Sri Lankan Tamil migrants attempting to sail to New Zealand have been detained by Indonesian officials, they have told the BBC.
The migrants told the BBC Tamil service that they are refusing to leave their ship before their safety can be guaranteed.
The MV Alicia is carrying 87 Sri Lankan Tamils and is now anchored off Indonesian shores.
They say that they fled Sri Lanka after the war there ended two years ago.
Their vessel was stopped by Indonesian authorities after it developed mechanical difficulties at sea on 9 July.
The refugees say that they will not leave the ship until they are assured of asylum either by New Zealand or by any other "similar country". They also want the UN to guarantee their safety.
The New Zealand government has reportedly refused to entertain any asylum requests from the refugees. The Indonesian government has not commented on the matter.
Passengers on the MV Alicia include six migrant women and five children. One of the women on board is reported to be pregnant.
The ship was reportedly spotted by Indonesian maritime police, who escorted it into the port of Tanjung Pinang.
One of those on board told BBC Tamil that they were mostly from northern Sri Lanka and were among those trapped during the final stages of the war between the Sri Lankan government and Tamil Tiger rebels.
They say that they all left Sri Lanka separately in the immediate aftermath of the war. Most of them say that they have been living in Malaysia for the past two years.
The refugees said that they hired the ship from Jakarta by selling off their remaining possessions and through financial help from diaspora organisations.
They say that they have provisions on board which will last for a month and that their health condition was good "so far".

The BBC is not responsible for the content of external Internet sites
Posted by Terrobuster at 10:03 PM