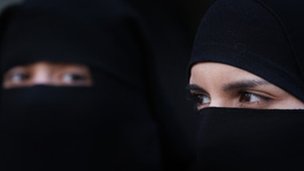 A law has come into force in France which makes it an offence for a Muslim woman to conceal her face behind a veil when in public.
It is the first country in Europe to publicly ban a form of dress some Muslims regard as a religious duty.
BBC News website readers in France have been sending in their reaction to this story. Here is a selection of their comments.

In my opinion, the law appears to be against individual liberties. I am a Muslim but I don't wear a head scarf as I think it's not faithful to my principles. However, this ban will certainly stigmatise Islam. This practice concerns a small number of Muslim women in France and in that way it appears extreme and unfair, because these women will tend to be confined at home most of the time. The consequences will be socially disastrous. Through this law you can see that Islam in France is perceived as a threat to French values and society. Sabrina, Lille, France
As a Muslim living in Paris, I'm so glad that this new law is here, for there has been a growing problem for some time now in Paris, with the radicalisation of young Muslims. Some of the more extreme Muslims have begun to use dress as a symbol or statement against French society. I feel that the extreme example of the Muslim faith works against all that Muslims in France stand for. That is, that we can live in harmony side by side with other religions and faiths. Jean Paul Baptiste, Paris, France
At last a law that protects the dignity and the human rights of women. This is not a racist law, it is a brave and progressive law that aims to put an end to the scandalous persecution of women in the Muslim community. I am not Sarkozy's biggest fan and I wish someone else was leading my country, but I support this law 100% as the plight of women having to wear this garment around the world really saddens me. Rachel Sword, Aix en Provence, France
I agree with this law. The women who walk around in public in the burqa, cause feelings of both fear, and pity. I have often heard that these women complain of being totally ignored by those around them - hardly surprising, really. Hiding your identity causes others to become wary and suspicious. Fiona Ricard, Gailhan, France
Despite being a human rights lawyer, I have mixed feelings about the law. Freedom of religion dictates that people should be able to manifest their faith how they wish, though it can be restricted by the state if there are strong reasons and it is proportionate. I think it should not be banned outright and that it is excessive, but it should perhaps be restricted in the case of employment or other areas of society. Whilst the state has to respect the diverse values of its population, immigrants also have to respect the values of the society they have chosen to live in - and France is a secular state. Andy, Strasbourg, France
Enacting a law to ban face covering veils in France is taking an approach that will polarise and entrench opinions. Very few Muslim women want to wear face veils, but telling them they can't will make them want to do so to protect what they see as an attack on their identity. Why take a line that will push Muslims (the majority of whom are not conservative) into a more polarised stance (unless of course it's to win a few votes)? Naveen Webber, Gex, France
I have been living in France for about six months now and the relative lack of political correctness is a refreshing change from UK. The veil ban is not a big issue here, more like a gentle re-assertion of French equality values. It definitely has nothing to do with a personal crusade by Sarkozy to win votes. Robin Marshall, Avignon, France


More on This Story

Posted by Terrobuster at 9:53 PM