Horn of Africa drought: Why is Somalia worst affected? 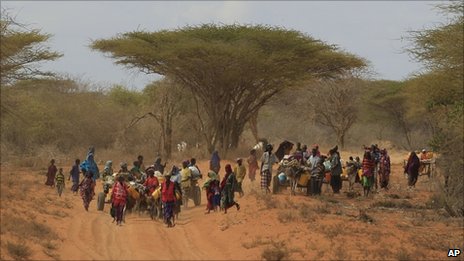 
Somalia is a failed state by anyone's reckoning, and while no-one is questioning the severity of the current tragedy, it is another matter assessing just how bad it is.
Gathering accurate and comprehensive information from inside Somalia has been a challenge for 20 years now. The country has been without a national government since the overthrow of President Mohamed Siad Barre in January 1991.
The latest drought in the Horn of Africa has thrown the region into even more chaos, and led to an unwelcome movement of Somalis into neighbouring Kenya and Ethiopia.
It is being called "the worst drought in north-east Africa for 60 years".
However, given the dramatic changes in the region in that time, the description is largely meaningless.
This is certainly one of the driest years in decades, but beyond that it is impossible to make comparisons about the impact on the population of the Horn.
For one thing, the population of some countries has more than doubled in the last 30-40 years.
According to World Bank figures, the population of Ethiopia in 1973 was 31 million. Today, it is in excess of 80 million.
The UN World Food Programme (WFP) says that changing weather patterns have made droughts more common in the region.
"Communities that used to have the relative luxury of several years of regular rainfall to recover from the occasional year of drought are now learning to live in an almost constant state of food insecurity due to a lack of water," said WFP head Josette Sheeran.
More often than not, though, conflict has been a contributing factor at times of hardship.
Fighting, food and famine The 1973 famine in Ethiopia occurred against the background of a creeping coup against Emperor Haile Selassie.
The 1984 famine there came at the height of the war between the government of Col Mengistu Haile Mariam and Tigrayan rebels.
Continue reading the main story

BACK 1 of 9 NEXT
And the 1992 food crisis in Somalia occurred as the country was descending into anarchy.
This year, the food shortages in Somalia have been exacerbated by the lack of humanitarian access to many areas, and accompanied by a sharp increase in food prices.
However, the numbers in need of food assistance are not yet anywhere near the 1992 figures.
The UN says 10 million people are currently on the verge of starvation.
In 1992, prior to the US-led intervention in Somalia, the number of people needing help was reckoned to be more than 23 million.
So aid workers are trying to respond as best they can, without becoming bogged down in comparisons.
To contain the unfolding humanitarian situation in the camps in Kenya and Ethiopia, the United Nations and international aid agencies desperately need access to areas of Somalia where insecurity is rife and where the militant Islamist group, al-Shabab, is in control.
WFP says it withdrew from al-Shabab-controlled areas of southern Somalia at the beginning of 2010 because of threats to the lives of UN staff, and the imposition of unacceptable operating conditions, including the imposition of informal taxes and a demand that no female staff work there for the WFP.
Now though, the organisations which have found it difficult, if not impossible, to operate in areas held by al-Shabab, are looking at the possibility of returning to southern Somalia.
Islamist concessions The insurgents have said that local and international aid agencies will be allowed to assist people affected by the drought.
The latest arrangements have still to be put to the test. 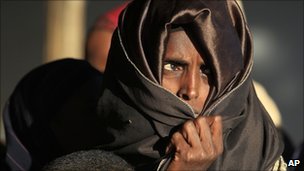 Somalis fleeing to Kenya report that militants at checkpoints have tried to stop people leaving
"Al-Shabab may be on the back foot in places," says one regional analyst.
Somalis fleeing to Kenya report that militants at checkpoints have tried to stop people leaving, but people are fleeing across the desert nonetheless.
The view from Ethiopia, one of the powerbrokers in the Horn of Africa, is that al-Shabab is desperate to use the drought as a means of regaining lost popularity and trust among local communities.
Both the US and UK describe al-Shabab, which has links to al-Qaeda, as a terrorist group.
It has fought Somalia's weak UN-backed Government and the African Union's peacekeepers since 2007.
Al-Shabab is thought to control much of southern Somalia, including the key Afgooi corridor that links the countryside in the south to the capital, Mogadishu.
It is reckoned to be stronger in the agricultural areas between the Juba and Shebelle Rivers, whereas the local clans tend to hold sway in the pastoral areas. The government claims to exercise authority in the far south, near the Kenyan border.
No soft landing The insecurity, compounded by the drought, has led to migration in all directions in the region.
Uncharacteristically, Somalis have been streaming into camps set up in war-ravaged Mogadishu. Traditionally, city residents have taken refuge in the countryside when fighting in the capital has intensified.
Some people have been heading north to the semi-autonomous region of Puntland. Others, of course, have been crossing into Kenya and Ethiopia.
It is also thought likely that people affected by drought in the Somali region of eastern Ethiopia have headed south into Kenya.
For those on the move, there is no soft landing anywhere.
North-eastern Kenya is an impoverished part of the country, historically neglected by government in Nairobi.
Much the same can be said about Ethiopia's attitude towards its Somali Region.
The third option, being internally displaced within Somalia, holds even greater risks for those who are vulnerable.
The late President Barre would scarcely recognise the country he ruled for more than 20 years, with perhaps one exception. Drought is still a recurring feature of life in the Horn.