A genocide baby's quest to forgive his father's killers 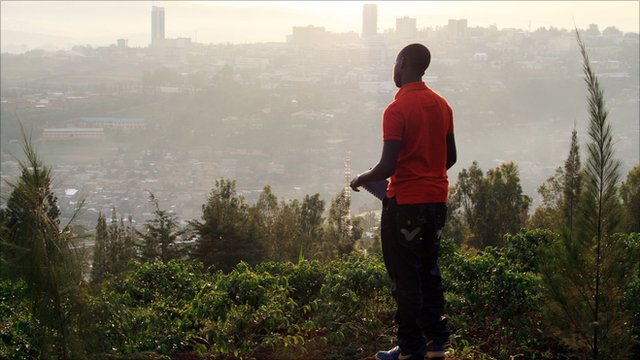 Click to play
Roger's father was killed in Rwanda when he was nine days old
Following the genocide in Rwanda in 1994, forgiveness has become central to the courts dealing with many of the accused. Can a teenager, born amid the genocide then whisked to safety in the UK, forgive his father's killers?
"I shouldn't really be here - I'm only really here because of what my mum did for me," says 16-year-old Roger Nsengiyumva.
Roger lives in Norwich, England, with his mother Illuminee, and loves playing football. He is an aspiring rapper and has starred in the film Africa United.
But his life could have been very different.

He was born in Rwanda one month into the genocide, and only survived because his mother hid him for months from the ethnic Hutu death squads who murdered his father.
Between April and June 1994, an estimated 800,000 Rwandans were killed in the space of 100 days. Most of the dead were ethnic Tutsis - and most of those who perpetrated the violence were Hutus. 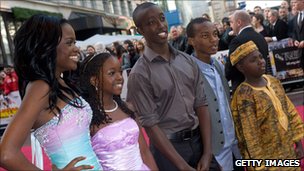 Roger - in the grey shirt - at the London premiere of Africa United
Roger's father John, a Tutsi, was murdered by Hutu friends who had attended his wedding. Fifty members of his family were also killed.
After the genocide, Illuminee and Roger fled to England. Illuminee has since forgiven John's killers.
"It was hurting me inside so I thought the way to get rid of it was to get it outside," she says. "It was my healing, but I will live with this forever."
Roger returned to Rwanda to take part in a week of special events marking the genocide, to see if he could follow his mother's path to forgiveness.
On his first day in the country, he attended a memorial event in Kigali's national stadium.
He listened as a woman said: "Time heals all wounds but there won't ever become a day when I don't miss your smiling face." 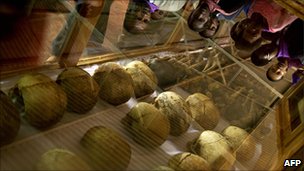 Continue reading the main story
But then a long piercing scream could be heard in the crowd, and then another.
"They are mourning," he was told. He saw wailing women being carried from the stadium.
It was a reminder of the intense grief thousands still feel.
Roger's father has a memorial in Norwich, but no-one knows where he was actually buried. It is thought he may be in Rwanda's largest mass grave, along with 250,000 others.
Roger returned to see a picture of his father he had placed there seven years ago. At that time he said he could forgive his father's killers, but things have changed.
"I understand quite a lot more," says Roger. "It was a bit more innocent then, now it's an anger that I would like to act upon.
"What I'm doing is a let-down to quite a lot of Rwandans, because me saying 'it's an anger I would like act upon' is detrimental to Rwanda now. I hate to use the word revenge but that's how I'm feeling at the moment."
But Roger is best friends with a Hutu teenager, Yves Desenge, who lives in Rwanda and co-starred with him in Africa United.
"I don't feel anger towards my generation of Hutus because we were babies when this happened," says Roger.
Tension and rivalry has always existed between the Hutus, who make up 85% of the population, and the Tutsi minority, who formed the traditional elite. 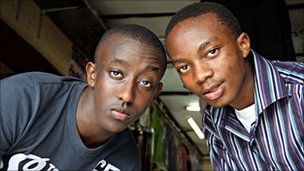 Roger, left, says his best friend Yves, a Hutu, is like a brother to him
In the years since the genocide, they have been encouraged to live alongside each other, like neighbours Frederick and Jacqueline do.
Jacqueline was 16 when a gang killed all 12 of her family with machetes and swords, while Frederick has served nine years for his part in a death squad that killed seven Tutsis in one day.
"Our relationship is good," says Frederick. "Our children live happily together. If she has a long journey she can leave her children here and they'll be taken care of here in my home."
And when Frederick asks if Roger can forgive him, the younger man finds himself lost for words. After a long pause, Roger says he can "generally".
"Because you've been so kind and you're doing a great thing. But in terms of asking forgiveness for my father's death, I can't because that wasn't your fault." 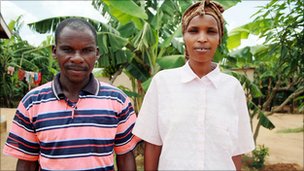 Frederick, a Hutu killer, and Jacqueline, a Tutsi whose family was murdered, now live as neighbours
But he cannot say the same of his father's killers.
"I hate to say it but I'd love to see them in body bags. If you're told to kill someone on the street and it's because they're a Tutsi, that's disgusting.
"But if you know that person and you're friends with their wife and their newborn is coming, I can't understand that. So I can't forgive that."
Despite the attempts at reconciliation in Rwanda, a report on 32 schools revealed that ethnic hatred is still prevalent.
And Roger realises the path to forgiveness is not straightforward.
"It's very complicated. It will be quite weird seeing this all again in another 10 years, seeing the difference between the me then and the me now.
"I'm young. I'm still only 16 so hopefully that anger will somehow fizzle out."

Roger: Genocide Baby is on BBC Three, Wednesday 13 July at 2100 BST. It is not available to viewers outside the UK.
Posted by Terrobuster at 8:27 AM