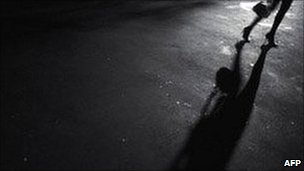 Evidence suggested some victims were trafficked more than once, said Mr Green


The UK has pledged greater co-operation with foreign police to target people-smugglers, as part of new efforts to combat human trafficking.
Powers to seize traffickers' profits will be extended and the law reviewed under the Home Office strategy, said Immigration Minister Damian Green.
Intelligence would be used to disrupt networks before they reached the UK.
However, some anti-slavery charities have complained the strategy emphasises border control over victim protection.
Mr Green stressed arrangements for helping victims in the UK remained "central to the government's approach", saying methods for dealing with adult victims would be strengthened.
"The strategy recognises the importance of working with source and transit countries to target and disrupt the work of traffickers and prevent more vulnerable men, women and children from becoming trafficking victims," he said.
The plan aims to stop exploitation of people for prostitution and cheap labour.
The National Referral Mechanism, which identifies potential trafficking victims, recorded 1,254 cases in the UK between April 2009 and December 2010, including 322 children.
Border action In a written statement to Parliament, Mr Green said some victims saved from gangmasters or pimps were sent home only to be re-trafficked either to Britain or other countries.
Others claim asylum and state benefits because they say it is unsafe for them to return home, he added.
"We will use intelligence to target those convicted or suspected of trafficking at the border," Mr Green said.
Responsibility for preventing trafficking will fall to the National Crime Agency, to be set up by 2013, which the government says will better connect local police to national and international agencies.
There were 116 prosecutions in the year to April but a review, to be completed by the end of the year, will aim to make the law less complex.
Other initiatives include training border staff to recognise potential trafficking cases, improving the response of health services to victims and contracting the Salvation Army to co-ordinate victim care.
'Sticking plasters' However, anti-slavery charities Ecpat UK, Anti-Slavery International and Stop the Traffik said in response that the strategy overlooked the fact that many perpetrators are already living in the UK.
Stop the Traffic founder Steve Chalke said: "Police and border actions against the criminals are key but unless there is a co-ordinated strategy to prevent human trafficking occurring in the first place, these efforts will be no more than sticking plasters."
Dr Aidan McQuade, director of Anti-Slavery International, said the strategy failed to concentrate on eradicating the discrimination and social exclusion that rendered people vulnerable to trafficking.
Ecpat UK director Christine Beddoe added that it failed to spell out special protection measures needed to safeguard children, such as safe accommodation and guardianship.