Hurricane Irene reaches category three on way to US 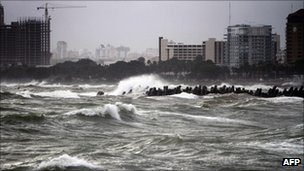 
Hurricane Irene has grown to category three force as it barrels towards the east coast of the United States.
Irene is now packing winds of 120 mph (193km/h) near the Bahamas, and the storm could reach the US mainland by the end of the week.
Tourists are being evacuated from an island off North Carolina and people are already stocking up on supplies in coastal areas of the US state.
The huge storm has brought flooding and power cuts across the Caribbean.
Federal officials have warned it could do the same along the US east coast as far north as Maine, even if it stays offshore.
Irene may strengthen On Wednesday afternoon, Irene was about 250 miles south-east of Nassau, the capital of the Bahamas, and crawling north-east at about 12mph. 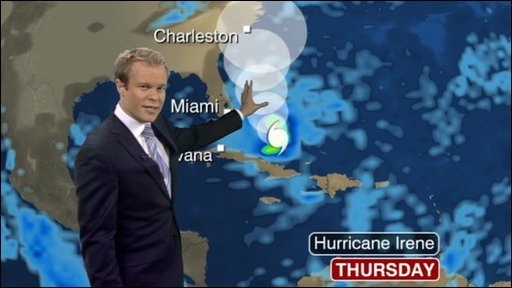 Click to play
Hurricane Irene tracks toward the Carolinas
Forecasters say the hurricane - which spans more than 400 miles - could strengthen to a category four storm by Thursday.
Officials as far north as Rhode Island and Massachusetts in the US have been making preparations for its possible arrival.
In North Carolina, residents have been buying up fuel and supplies, and plywood to board up windows.
Tourists began evacuating Ocracoke Island, off North Carolina, on Wednesday, loading their cars on to ferries bound for the mainland.
The 800 or so residents who live on the barrier island have been advised to evacuate on Thursday.
A number of tourists have caught flights off the Bahamas ahead of the storm's arrival there.
Smaller hotels were shut on the island and larger resorts were booked up with people seeking a place to ride out the storm.
The storm was expected to make many roads impassable in downtown Nassau, the Bahamian capital.
Coastal areas could suffer beach erosion because of tidal-surge waves and tropical-storm winds, warned the National Oceanographic and Atmospheric Administration.
Woman dies On Tuesday, Irene pelted the UK overseas territory of the Turks and Caicos Islands with high winds and heavy rain. 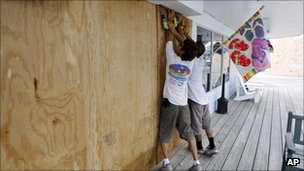 In Cape Hatteras, North Carolina, residents prepared for evacuation
The US state department warned US citizens against travelling to the region.
Hundreds of people in the Dominican Republic took refuge in schools and churches after they were displaced by storm flooding.
In Puerto Rico, the storm knocked out power to more than half the island and affected the water supplies of more than 100,000 people.
A 62-year-old woman died while attempting to drive over a swollen river near the capital, San Juan, the Associated Press reported.
US President Barack Obama declared an emergency - making the island eligible for federal help.
Craig Fugate, head of the Federal Emergency Management Agency, advised residents of the east coast from the Mid-Atlantic region up to New England to prepare for the hurricane's arrival.
"It's going to be close and whether we get a brush or whether we have a landfall, it's too early to say," he told ABC television.
"Go ahead and make sure you're ready and then if evacuations are required, heed those evacuation orders."