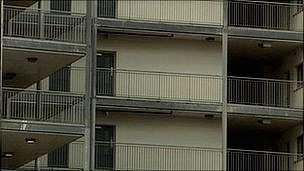 Two women were rescued from an apartment block in King Street
Four people have been arrested in Belfast in a police investigation into a human trafficking and vice ring.
Police said six suspected trafficking victims had been rescued in recent weeks due to their enquiries.
The investigation has been running for three months and while centred in Belfast, stretched across Europe.
The four arrests on Wednesday were made in west Belfast. Three of the suspects are eastern European and the other is from Northern Ireland.
All the alleged victims are eastern European.
Two men, aged 22 and 29, were arrested in apartments in King Street and a 24-year-old man and 22-year-old woman in Cavendish Street, off the Falls Road.

Detective Inspector Douglas Grant
Two women were rescued on Wednesday from the apartment block in King Street and a property in College Place North.
The two victims rescued on Wednesday are being given specialist support at Garnerville police base and offered the services provided by the UK Human Trafficking Centre.
Both women are in their 20s. The previous four victims were also cared for in this way.
The officer leading the investigation, Detective Inspector Douglas Grant, said: "We have been investigating a trafficking and prostitution ring stretching across Europe for the past three months.
"Police have an ongoing commitment to rescue victims of human trafficking, who in this case we believe were being used for the vice trade.
"And we have an equally strong commitment to dismantle the organised crime gangs involved. Today's arrest and rescue operation is the latest stage in this ongoing, proactive investigation.
"Our enquiries will continue over the coming weeks and will involve other law enforcement agencies across Europe."
Two years ago 25 victims of human trafficking were rescued in NI; last year 23 victims were rescued; in the first five months of this year, 23 victims have been rescued.