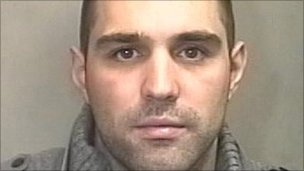 Paedophile Daniel Taylor was described by the judge as "opportunistic and predatory"
A paedophile who police believe is the UK's most prolific collector of child abuse images has been given an indeterminate jail sentence.
Daniel Taylor, 31, of Farnley, Leeds had more than 300,000 images of abuse and pleaded guilty to 27 offences.
At Bradford Crown Court, he admitted 20 counts of making indecent images, four of taking indecent images and two counts of sexual assault on a baby.
Judge Rodney Grant said Taylor had been "opportunistic and predatory".
Police in London identified Taylor as being "the single most prolific 'owner' of such images in the UK".
Suspects 'ranked' The defendant also admitted possessing the vast collection of indecent images, during the hearing.
Taylor was told he will be put on the sex offenders' register for life and will not be released from prison until he was no longer considered a risk to the public.
He was told he would serve a minimum of three years before being considered for parole.
West Yorkshire Police said that using new file-sharing technology and software from the US had been used to cross-reference a range of data in order to "rank" suspects.
A spokesman said: "Even today, according to this software, he is still listed as number one in the country."

The BBC is not responsible for the content of external Internet sites
Posted by Terrobuster at 8:04 AM