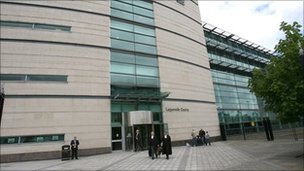 A man accused of trafficking eastern European women into Northern Ireland to work in the sex trade, took up to 80% of their earnings, a court has heard.
Details emerged as two men appeared at Belfast Magistrates' Court on Friday on charges connected to an investigation into a Europe-wide vice ring.
They were arrested after the PSNI raided properties in the city on Wednesday.
Six women alleged to be victims were rescued.
One of the suspects, 29-year-old Bronislav Rybensky, a Czech Republic national with an address at College Central Apartments, King Street, Belfast, is charged with trafficking into and within the UK, controlling prostitution and brothel keeping.
Also in the dock was Lyle Lamont, 22, of Squires Hill Crescent in the city.
He is charged with brothel keeping and controlling prostitution.
A detective constable told the court Mr Rybensky is believed to be the main instigator in a crime group which trafficked women from eastern Europe into Northern Ireland through Dublin.
The officer claimed the women thought they were coming for modelling work.
Escort website But on arrival they were allegedly told they owed money for flights and accommodation and had to repay it through prostitution.
The officer claimed Mr Rybensky took between 50-80% of their earnings from each client.
Photographs of the women were also taken for internet advertising on an escort website, it was alleged.
The court was told clients were charged £100 for a 30-minute session and £160 for an hour.
Opposing Mr Rybensky's bail application, the detective claimed he could commit further offences or flee the jurisdiction.
It was alleged that he had used a bank account to book up to 70 flights.
Cross-examined by a defence lawyer, the detective confirmed only one of the women claimed she had been physically assaulted.
The allegation related to an incident where she was put in a bath or shower and had cold water poured over her.
The court was told that all of the women had travelled to Northern Ireland voluntarily, with some of them having worked in the sex industry in the Czech Republic.
Surveillance The defence lawyer said: "One of the alleged victims stated she believed she was here to model. All of the others came knowing they were coming to work as prostitutes."
He added that covert surveillance evidence has already been obtained, arguing that this reduced the threat of Mr Rybensky interfering with witnesses.
But despite his client having a potential bail address at his mother's home in west Belfast, District Judge Fiona Bagnall refused bail.
Mr Rybensky was remanded in custody to appear again by video link next month.
Mr Lamont was also remanded in custody until next week when he is expected to apply for bail.
His solicitor stressed in court that Mr Lamont was not charged with any trafficking offences.